We’ve been exploring our surroundings here in l’Oise, especially the big spiritual “hole” between Clermont and Amiens to the North, stretching from the Oise to the Somme départements, where there are lots of people, but no evangelical Churches.

The people are in lots and lots of villages and a few small towns. Places which are hard to reach with the message of Jesus’ love, in which it is hard to plant Churches.

A couple of days ago I discovered a worship group which I’d not come across before: Elevation Worship. One of the songs from their latest album, There is a Cloud, struck me:

The first verse and chorus are:

The spiritual walls in France can seem very resistant, sometimes it does seem they will never fall. But they are falling, because the battle is won, God moves mountains. In those plateaux de Picardie, God is already moving in the hearts of women, men, girls and boys by His amazing Holy Spirit, drawing them to Jesus. To human minds, there may sometimes not seem to be any way, but God makes a way where there is no way!

God has done amazing things in France, He is doing incredible things now in France. And I believe, I’ll see You do it again — yes, Lord, here!

We are here in the Oise to work with a small church in the town of Clermont, population 10,500 (2014). Here is the main street in the old part of the town:

There is a mix of better-off and poorer areas in the town, not all of it looks quite so attractive!

The church was only planted in September last year, so is very young, but is going very well. There are no other evangelical churches in Clermont.

We attended our first service yesterday afternoon (5pm). Here is the outside of the premises used for the services: 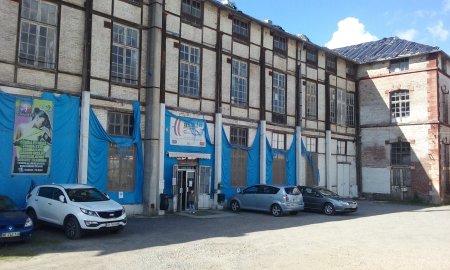 The church is called La Source, meaning The Spring, reflecting the Spring of Living Water we have in Jesus!

Can you guess what the premises are used for during the week?

Yep, it’s a weight training gym, in French une salle de musculation. Weight training is very popular here and there are a number of similar places in the town. The owner is part of the church. 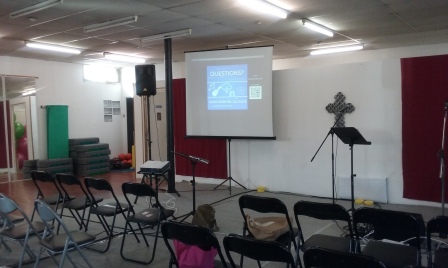 We enjoyed meeting our brothers and sisters and we all had a great time together, with worship, testimonies and a message.

The church emphasises doing fun things for the community of Clermont. The next fun activity will be a board games evening this coming Saturday: 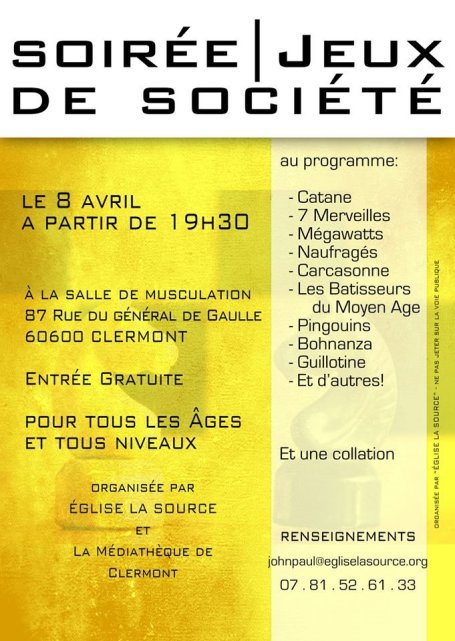 We had a stress-free journey back to France on 29 March and found our new temporary accommodation easily: a gîte (holiday cottage) in the village of Rémérangles, about 15 minutes from the small town of Clermont in the Oise département.

The gîte, shown above, is comfortable and we quickly made it home. It is part of a working farm, right in the centre of the village. Chris would love to have a go with the farmer’s “boy’s toys” but sadly he doesn’t leave the keys in them… 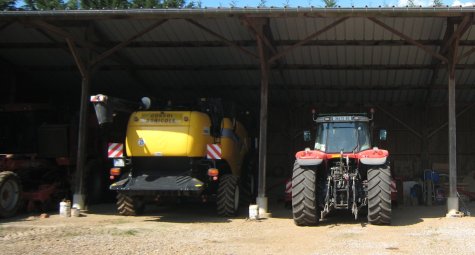 Here’s the view south from the edge of the farm out over the countryside:

Here we are on the plateaux of Picardie, with wide open views. Clermont marks the start of the forested valleys of the Oise, which extend southwards towards Paris. You can just see the line of forest on the horizon in the photo above.

Below is the village church on the left and the rather splendid Mairie (town hall) on the right: not bad for a village of just 215 inhabitants (in 2014)! Below is the main street.

Because God loves every person in France